Over the past 15 years the City of Perry has continued to revitalize their downtown creating many destinations to attract trail users , which led to a higher volume of pedestrians and bicyclists having to cross Hwy 144, a four-lane undivided highway. The Hwy 144/Willis Avenue intersection’s crash rate was three times the state average with 23 crashes in three years with 20 percent resulting in injury, including one fatality. The City of Perry worked with Bolton & Menk to update the signal at the intersection and implement a four- to three-lane conversion on Hwy 144 in downtown Perry to reduce the number of crashes, improve pedestrian safety, and calm traffic.

Real Collaboration. Real Results
Bolton & Menk worked with the Iowa DOT and City of Perry to establish a multi-phase reconstruction plan that promoted safety and vehicular-user efficiency, by implementing a four-to-three lane conversion on the entirety of Hwy 144 in Perry. Thorough public engagement efforts collected citizen input and educated community members on the proposed plan using resources from the FHWA, Iowa DOT, and AARP.

After working with all parties to complete a TSIP grant application for phase 1 to re-do the Hwy 144/Willis intersection, the project was awarded and partially paid for with Iowa DOT Traffic of Safety funds. The initial results from phase 1 show that the four-to-three lane conversion has been successful in improving vehicle and pedestrian safety. Overall crashes are down 70% with no injury related crashes.

Four- to Three-Lane Conversions
Four- to three-lane conversions increased in popularity across the United States in the 1990s and are typically spurred by an overlay project or safety needs. Four- to three-lane conversions, commonly known as “road diets,” have proven to reduce crash rates by 47 percent on average. Additionally, road diets reduce the number of conflict chances, provide better sight distances for turning vehicles, lessen speeding, and improve access.
“Projects like road diets are a fairly inexpensive way to make a major change in safety for these four-lane, undivided corridors. They can make a positive impact in a community by reducing crashes, increasing safety, and allowing the community to use the extra space for other advantages like bike infrastructure or wider sidewalks.” said Jennifer McCoy, senior traffic engineer at Bolton & Menk. 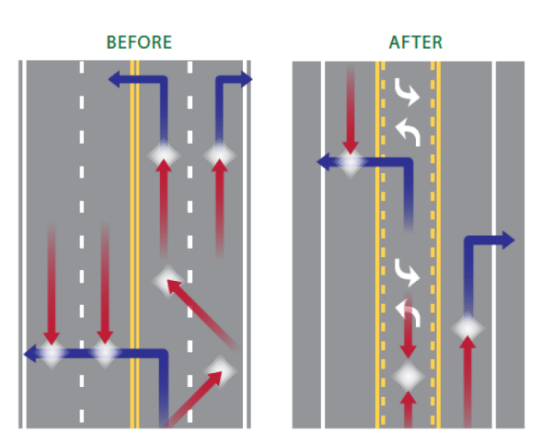 As the City of Perry continues to revitalize their downtown and attract more pedestrians, bicyclists, and motorists to the Hwy 144 corridor, their need for safe streets increases. The four-to-three lane conversion promotes a safer crossing, provides better access to the downtown district, and creates an efficient section for the travelling public adjacent to downtown. Making the City of Perry a more walkable and livable community for all residents and visitors to enjoy.