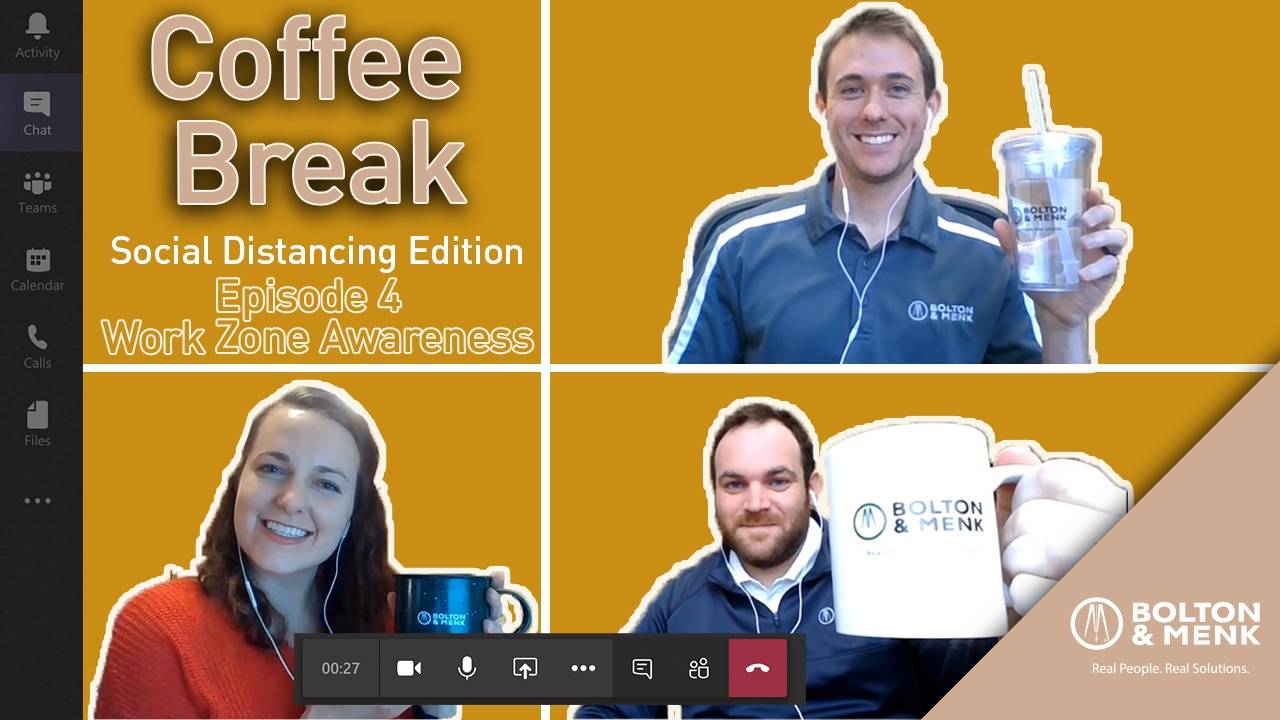 You didn’t think social distancing would keep us from doing Coffee Break, did you? Construction services are essential and will continue throughout the Midwest as the temperatures warm up. Here with a quick reminder of what to expect are two faces you might see out and about in your area (at a safe distance and with proper protective equipment, of course).

JH: Did you guys have audio issues when Nick was talking about the social media?

JH: Try it one more time.

JH: Do we get to see a draft of this before it gets posted to social media?

Name and position at Bolton & Menk?

JB: I’m Josh Hrabe, engineering technician, and I typically drink my coffee black and only during the winter.

NA: My name’s Nick Amatuccio, I’m a project engineer, and I’ve never had a cup of coffee in my life.

How important is it to pay attention to your surroundings when you’re driving through construction zones?

NA: I’d say it’s very important. Workers can’t always see you if you’re walking especially, through a construction zone, so make eye contact with especially operators of a large backhoe or something of that sort.

JH: Kind of to piggyback off of what Nick said – you obviously don’t want to be in a big piece of equipment’s blind spot.

Road closed and detour signs, you see those a lot during construction sites, are they just suggestions?

JH: You’d be surprised at the lack of understanding about what the definition of “Road Closed to Thru Traffic” is. We get a lot of vehicle traffic that thinks that they can get through to the next street that they’re trying to get on. People get in a fuss and obviously the sign is there for a reason – trying to keep both the traveling safe and the workers safe doing the actual work… don’t air this. *laughs*

As a driver during construction season, how can I keep my sanity with the inevitable delays that are going to happen?

Do either of you have a unique story of someone not following signage?

JH: I could count on both fingers and toes how many times people have driven around signs that were indicating the road was closed. There’s been a handful of times where people have gone around signs and actually gotten stuck in the roadway and they had to call a tow company.

NA: To kind of go off of that, one time we were pouring fresh concrete sidewalk in a heavily- pedestrian area in a downtown corridor. It was right at the end of the school day and a school bus was letting off a bunch of kids. One of the kids just started running off the bus toward home, ran down the sidewalk, ran right through the barricades and right into the fresh concrete. He fell and got his legs and arms all full of concrete. We had to hose him down right there with the concrete truck.

Any final thoughts? Anything you think the general public needs to know with the upcoming construction season to make sure both the workers and the public are staying safe?

NA: I would just say slow down, make sure you’re looking at signs as much as possible and actually reading them. We try to put them out and update them as much as possible to actually let you know here you should be going. Also, be patient. Things change on a daily basis – a lot of times out of our control or the contractor’s control. Just be patient and realize we’re trying to get everything done as soon as possible and realize your frustrations.

JH: Like Nick said, patience is the ultimate virtue. We certainly understand the inconveniences and, like Nick said, we’re just trying to get this thing done to try to return people back to their normal lives as quick as possible.

CB: Thank you guys for being our first social distancing coffee break!

All: Thanks for watching!