Relinking Muscatine to the Mississippi River

Muscatine, Iowa, historically known as the “Pearl City” or “The Button Factory of the World”, is rich in cultural and ethnic diversity, rooted in industrial beginnings that shaped the city’s growth along the Mississippi River. Mississippi Drive, once a bustling boat and rail yard turned truck route, divided downtown Muscatine from the riverfront. As the city evolved, the riverfront transformed into a regional amenity with recreational offerings and public open space but was plagued by increased vehicular traffic and lack of connectivity to downtown. Accessibility challenges, dangerous railroad crossings, and aging infrastructure have historically plagued the 1.6-mile corridor.

In 2011, Blue Zones and Healthyways joined with Wellmark Blue Cross and Blue Shield to deliver the Blue Zones Project across the state of Iowa in support of the Governor’s Healthiest State Initiative. Since its inception, Iowa has moved from 16th to 9th in the Well-Being Index state rankings (healthyways.com). Designated as a Blue Zones Project in 2014, the city established an expectation for redefining the priorities of Mississippi Drive. The long-term goal was to provide a safe and attractive multi-modal streetscape to promote economic development and increase usage of the riverfront. The hope of re-energizing the city’s Riverside Park hinged on the future of the corridor and the ability to establish welcoming, accessible, and safer access to the park. 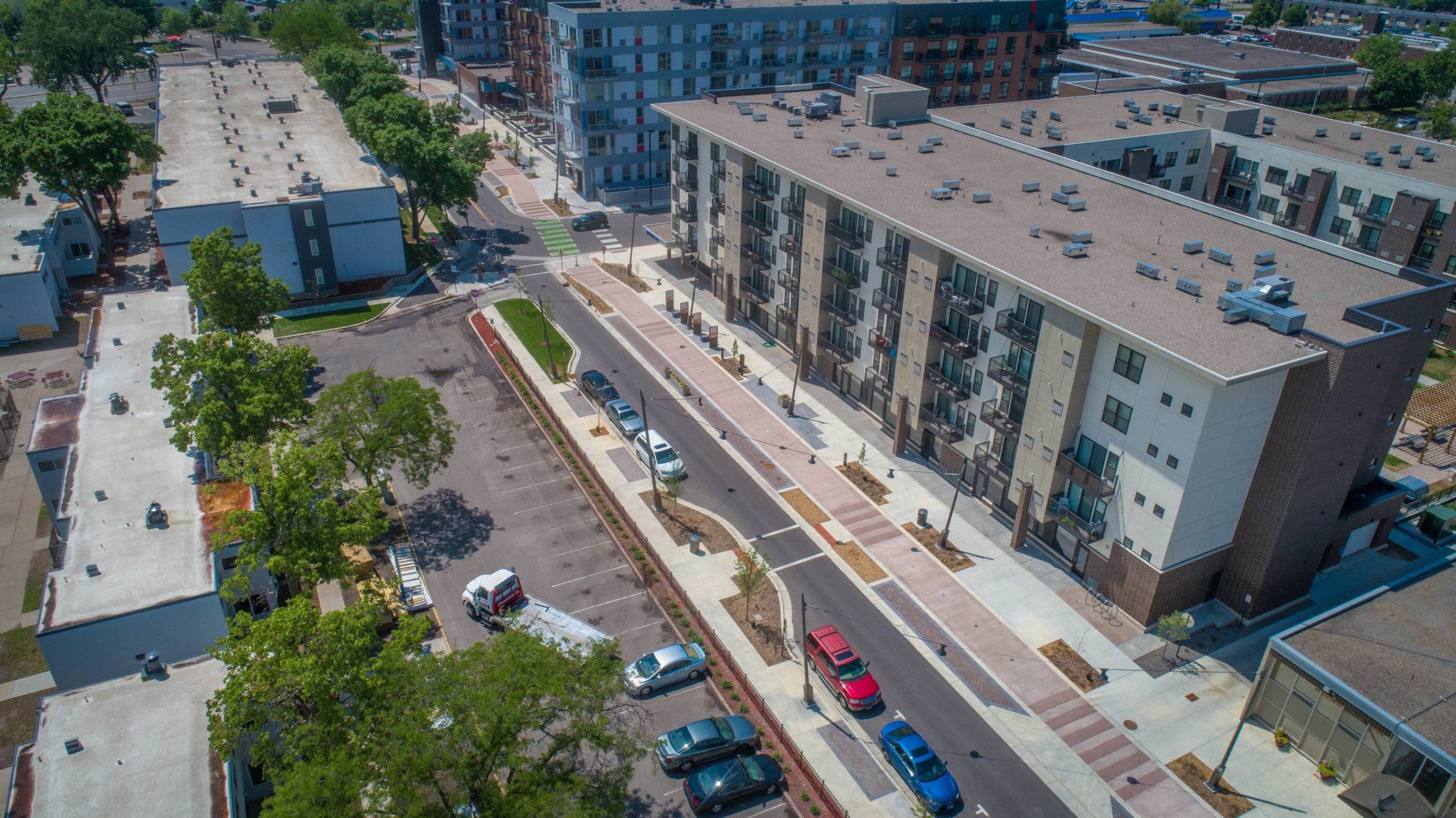 Bolton & Menk teamed up with the city, Canadian Pacific Railway, Blue Zones, and the community to develop a plan that incorporated the needs of the area while creating a safe and pedestrian-friendly corridor environment.

Through a series of outreach events, design alternatives using complete streets principles were presented to the community. Audience polling allowed participants to provide meaningful input on proposed improvements and develop a rapport with our design team. This engagement process helped community members gain a better understanding of the project’s technical aspects. Based on technical analysis and public input, the final corridor design was ‘right sized’ for existing and future vehicular traffic, emphasizing safety and connectivity for pedestrians. The design developed a district identity for the corridor that could be replicated in future phases of corridor and downtown redevelopment, and reconnected the riverfront to downtown.

Elements of the plan give a nod to the historical context of the site by reusing historic clay pavers which were previously used in Muscatine’s first paved streets. Corridor monuments and wayfinding markers portray an industrial character and display photographs of Muscatine’s past. Limestone seat walls, decorative paving, vegetated medians, and planting beds all come together to develop a sense of place that was previously missing from the corridor.

Project construction began in Spring 2017 and was completed in October 2018. This was the largest public works project undertaken over a two-year period in the city’s history. Careful coordination was pivotal to implement corridor improvements while minimizing disturbance to local residents, business, and industry, in addition to other on-going city projects.

The completion of the Mississippi Drive reconstruction serves as a catalyst for public improvement projects aimed at improving the quality of life for the Muscatine community and its visitors, as well as promoting the identity of the city as a progressive community. The modernized corridor and the city’s desire to revitalize downtown has encouraged private reinvestment along the corridor, including the construction of a $42 million hotel and conference center which fronts onto Mississippi Drive.

This project has become a showcase corridor for the city and will continue to have a positive influence on the economic vitality of Muscatine’s downtown area while influencing the expectation for future public improvements. The completion of the Mississippi Drive reconstruction project has kickstarted several private development projects as well as additional phases, including a roundabout at one end of the corridor and a continuation of the project’s design onto an adjoining corridor.

As published in Iowa League of Cities CityScape magazine