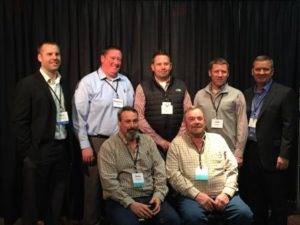 A Quality Asphalt Award was given to the City of Perry and Bolton & Menk, Inc. from the Asphalt Paving Association of Iowa. The Pavement Maintenance Program in Perry, Iowa was honored with an Asphalt Plant Environmental Stewardship Award for a Municipal Paving Program for cities with population under 10,000.

Due to limited funding resources, the City of Perry had not completed any significant street rehabilitation for five years. During that time, streets continued to deteriorate and several were in a state of disrepair, primarily those with high residency volumes that serve as a connector to primary routes in the community.

With the use of fuel tax funds for road improvements, a pavement maintenance program was developed with Bolton & Menk. Project cost estimates were prepared and the work was organized into a funding package that allowed the City to include the project in a bond that would be repaid over four years of increased fuel tax revenue in conjunction with local option sales tax.

The pavement maintenance program allowed the City to determine multiple streets that would benefit from the first use of their increased fuel tax revenue. The project included 52 blocks of street rehabilitation primarily focused on pavement patching, limited reconstruction, and significant asphalt surface rehabilitation. The project was completed in the spring of 2016.