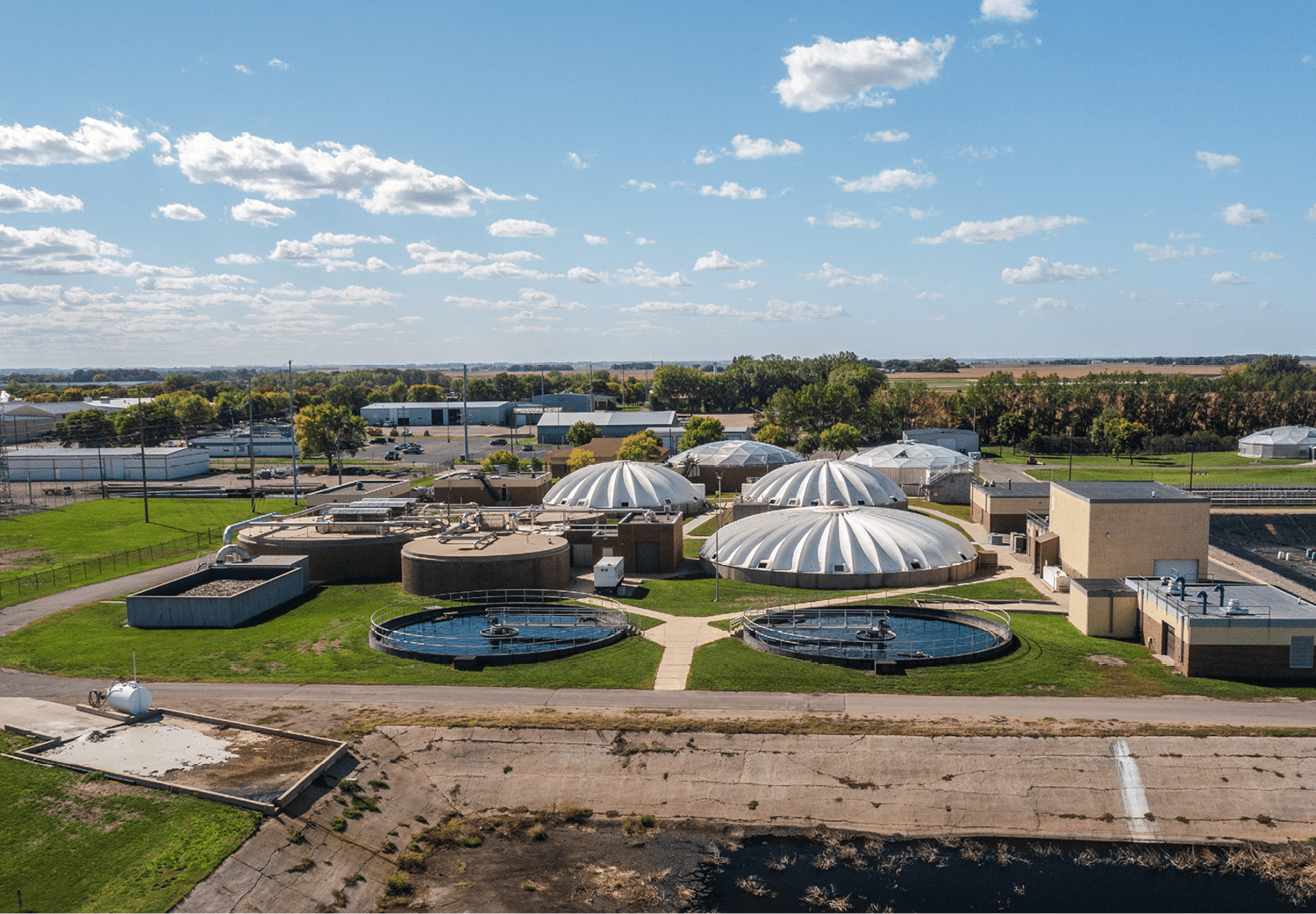 The Marshall Wastewater Treatment Facility provides wastewater treatment for the City of Marshall as well as several large industrial users. While multiple smaller projects had been implemented 12-15 years ago, the facility was facing significant shortfalls in terms of equipment and capacity. Complicating the planning for these upgrades were several unknowns – the unknown timing of obtaining a reissued NPDES permit for both the city and an industrial user, the potential impact of NPDES permit discharge limits on operations, and the pending outcome of ongoing Whole Effluent Toxicity (WET) testing.

The WET testing results have the potential to impact NPDES permit conditions. Initial testing was inconclusive whether the waste component causing the WET test failure was chlorides, nitrogen, or sulfates. To limit the potential impact of chlorides in the wastewater, the Public Utility Commission implemented improvements at the lime softening water treatment facility to reduce the wastewater’s chloride content. Further improvements to address nutrient or sulfate removal were placed on hold pending the completion of the water treatment facility improvement and additional WET testing.

Future industrial NPDES permit modifications can also impact an industry’s discharge to the wastewater treatment facility. If a significant industrial user is given a discharge permit that will require additional water discharge treatment, they may decide to perform more water treatment at the plant, limiting the amount of waste sent to the city. This would reduce some capacity concerns, particularly with the Autothermal Thermophilic Aerobic Digestion (ATAD) system. Since the industry permit had not been re-issued, the City of Marshall decided to delay significant upgrades to the ATAD system and focus on equipment reliability.

While these issues made long-term planning for infrastructure investment difficult, the existing infrastructure needed immediate attention to maintain consistent treatment for users. Bolton & Menk Inc. worked with city staff to develop a phased approach to implement the necessary improvements.

The first phase was designed to address the immediate maintenance needs and treatment capacity limitations. Future phases of capital improvement projects were planned to address the anticipated NPDES permit requirements, the WET testing results, and the impacts of NPDES permits for the industrial users.

During preliminary engineering for the first phase of the project, the following items were identified as needing near-term attention.

The existing ceramic diffusers in the activated sludge basin were originally installed in the early 1990s. These diffusers required annual scrubbing and descaling to maintain performance. The three 200 HP rotary lobe blowers to aerate the basins were also nearing the end of their useful life. Evaluation of the aeration basin capacity showed the activated sludge process with trickling filters treatment capacity provided adequate treatment for the facility’s near-term loadings. The aeration blowers were designed to provide more air supply than the aeration basins required with a full population of diffusers. This analysis provided an opportunity to downsize the aeration blowers to 75 HP each. In addition, to provide further control capacity to the basins’ aeration supply, a control system with modulating valves, air flow meters, and dissolved oxygen meters for each of the basin zones was installed. This system provides significant energy savings and process treatment flexibility to assist in accommodating future potential nutrient removal requirements.

The facility has two 60-foot-diameter trickling filter towers, with one tower typically offline unless influent CBOD loads increase. These filters needed replacement of the media and the distribution arms to maintain operational reliability. After evaluating near-term loadings, it was determined only one trickling filter would be refurbished with new media and distribution arms. Staff had also experienced significant downtime issues with the existing submersible pumps which feed the trickling filter. These pumps were operated on soft start drives, and as flows varied the pumps would be pushed to operate outside of their design curves resulting in seal failures and premature wear. To provide a system with better reliability under varying operational conditions, the trickling filter pump station was reconfigured to use three vertical turbine wastewater pumps with “below grade” discharges and variable frequency drives. The control for the recycle valve was reconfigured to maintain the wet well level and provide better control of the recycle rate. This type of configuration had been previously used by the city in stormwater pumping applications. A key concept in developing the trickling filter renovation was understanding that while near-term improvements were needed to keep the system operational, the trickling filter attached growth system is not conducive to a potential future change to biological nutrient removal.

A significant effort was spent reviewing options for additional biosolids storage. The existing storage included three tanks with 4.0 million gallons of total storage volume. One of these storage tanks was utilized as a buffer tank and was used only in the fall to store sludge while the other two tanks were being emptied and sludge land applied. Utilizing decanting, the sludge would be thickened to 6-8 percent, which presented challenges in re-mixing the two 60-foot-diameter storage tanks prior to land application. The design solution included a four rectangular-tank system with jet mixing and decant facilities for each tank. Each tank has a storage capacity of 475,000 gallons, for a total additional storage capacity of 1.9 million gallons.

As seen in Wastewatcher Magazine

Jon Peterson, PE likes the variety of challenges he faces with Bolton & Menk. “Using creativity to find the best solution captivates me,” he says. Jon is a registered Professional Engineer with experience in all phases of water and wastewater system design. He began engineering in 1985, gaining experience in design, construction, and inspection of water treatment facilities, wastewater treatment facilities, wastewater collection and transportation systems, and water distribution facilities. In addition to his challenges at work, Jon is a sheep farmer to 27 Icelandic sheep. He is working to implement regenerative agriculture practices on his 40-acre farm along the Minnesota River.