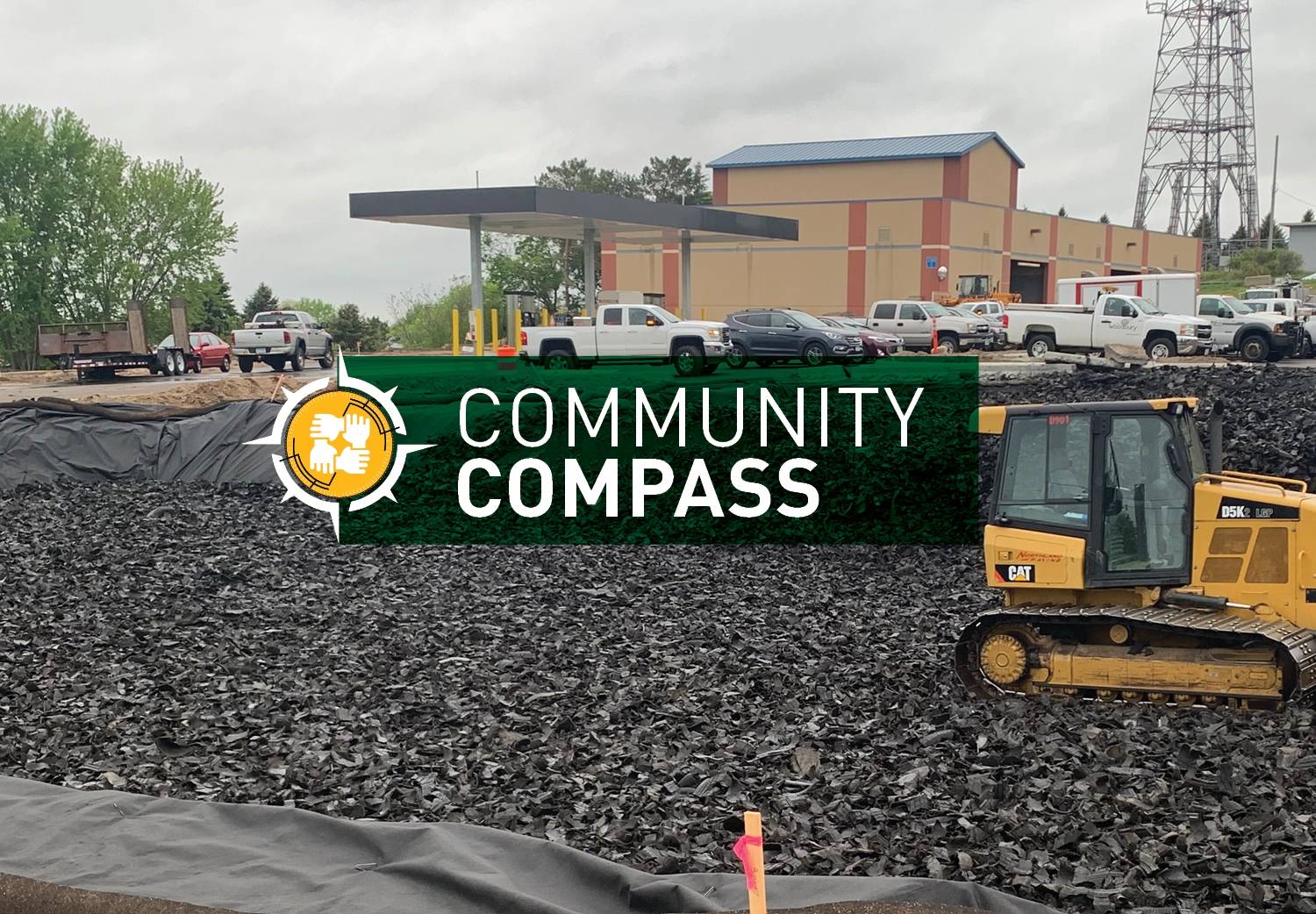 Reduce, reuse, recycle – the age-old phrase we live by to keep Earth as fruitful as possible for as long as possible. The City of Woodbury partnered with Bolton & Menk to put their own twist on reusing and recycling discarded tires to meet stormwater BMP needs. The city began work on a renovation and expansion of their public work’s site that required updated stormwater management regulations to be met through improving runoff treatment across impervious surfaces.

It’s no surprise that out of all the BMPs implemented throughout the public works site, the one that undoubtedly stands out the most from the more conventional BMPs listed would be the site’s TDA sections. TDA are recycled tires manufactured through a shredding process and repurposed for a variety of green construction applications. Generally, TDA is a fraction of the weight of many soils, is highly permeable, which promotes drainage, insulates eight times better than gravel, and costs less than most sands and gravels, making it an obvious choice for road construction projects since the late 1980’s. However, using TDA for stormwater management is a new concept.

For the City of Woodbury, implementing TDA for stormwater management was a no-brainer when considering the benefits. The city is an active participant in Minnesota GreenStep Cities, promoting sustainable facility management and operation while implementing BMPs wherever possible. The state of Minnesota discards approximately 4.75 million-tires-per-year. In total, the public works and parks maintenance renovation and expansion project repurposed approximately 210,000 tires within the underground infiltration system, repurposing approximately 3 years’ worth of discarded tires from the City of Woodbury alone. Using TDA in the project’s parking lots was environmentally friendly by way of reuse, in addition to lessening associated costs by 60 percent, compared to traditional stone aggregate.

The design team integrated porous pavement for the surface in areas that used the TDA subsurface, which allows stormwater runoff to drain freely into the pavement, and into the TDA sections below the parking lot–simulating environments similar to grassed areas promoting infiltration to soak up runoff from adjacent areas when it rains. These features reduce the amount of runoff generated on-site, mitigating flooding and transportation of pollutants (dirt, oil, gas, etc.) , while routing stormwater into the TDA infiltration sections.

Collaborative efforts between the design team, First State Tire Recycling, TDA Manufacturing, and the city were essential in the development of a stormwater BMP design that furthered the green infrastructure and sustainability efforts of the community. However, the sustainability mindset did not stop at the design level, as the City of Woodbury also has taken initiative in promoting the longevity of these BMPs by developing and implementing an effective maintenance and operation plan which will in turn reduce the overall maintenance costs down the road.

Learn more about how we can serve your community’s water & wastewater engineering needs here.