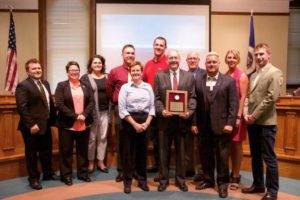 The Minnesota Recreation and Parks Association (MRPA) awarded the City of Hastings and Bolton & Menk with an Award of Excellence in the Park and Facility category for the Riverfront Renaissance Improvements Project. The award was presented at the City of Hastings City Council Meeting on May 15. The MRPA Award of Excellence program recognizes agencies or organizations in Minnesota for outstanding achievements in parks, recreation, and leisure services.

The City of Hastings expressed a desire to revitalize and reconnect their downtown to the Mississippi River. Bolton & Menk collaborated with the City to develop a three-phase Downtown Riverfront Renaissance project. Phases one and three focused primarily on the downtown infrastructure, while the second phase focused on Levee Park, a prominent park straddling the Mississippi River and downtown business district.

Through collaboration with City staff, stakeholder groups, and the general public a Park Master Plan was developed. The Master Plan included a limestone amphitheater, musical playground, ice skating rink, branding and signage, enhancement of the Mississippi River Trail, and a veteran’s memorial.

Planning for the project began in 2013 and was completed in October, 2016. Through combined efforts, the City now has a uniquely stunning park that links the downtown to the Mississippi River.