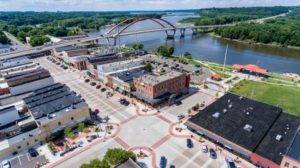 The City of Hastings wanted to revitalize and reconnect their downtown to the Mississippi River. Bolton & Menk collaborated with the city to develop a three-phase Downtown Riverfront Renaissance project. Phases one and three focused primarily on the downtown infrastructure, while the second phase focused on Levee Park, a prominent park straddling the Mississippi River and downtown business district.

Through combined efforts, the city now has an updated park linking downtown to the Mississippi River.

The Projects of the Year award program promotes excellence in the management and administration of public works projects, recognizing the alliance among the managing agency, contractor, consultant, and their cooperative achievements.

Congratulations to the City of Hastings!